All our sculptures are hand carved in the beautiful area of Pietrasanta.

Pietrasanta is a medieval town situated in the popular and attractive Italian Riviera in northern Tuscany. Pietrasanta has its origins in the Middle Ages, when the town developed around a Lombard castle and had a fascinating medieval history. 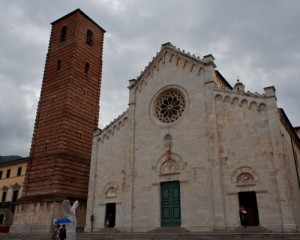 In 13th century Tuscany, the rulers of the city of Lucca pursued an active policy of subjugating the territories that surrounded them, especially in Versilia. This of course led to a great deal of confrontation with the the local feudal lords, and also ongoing confrontations with the other important cities in the region, such as Pisa.

This feudal domination of the countryside made the foundation of new towns and cities very important, because the inhabitants who moved to these new towns were effectively escaping from their feudal domination, to the extent that in Italy it was said that ‘City air makes men free’.

Pietrasanta was planned and constructed to have a regular rectangular plan. In the early 14th century the town started the construction of the defensive walls and entry gates into the town, an action that also encompassed some of the villages close by such as Terranuova. These defensive walls were further strengthened when the town came under the Lordship of Castruccio Castracani (1281-1328), who also constructed two fortresses and the cathedral.

Pietrasanta had a turbulent time through the Middle Ages, which followed the fortunes of the many feudal families who were competing for the control of the Versilia region. The town suffered from several different occupations, among the controlling towns being Pisa, Lucca and Genoa. Eventually it fell under the control of Florence. 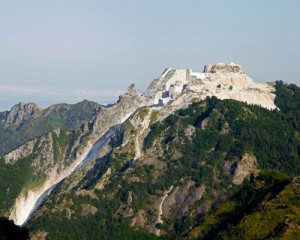 From the 18th to the 19th centuries the iron based operations were reactivated and new developments started outside the walls – including marble processing and various artistic crafts which still characterize the economic life of the city to this day.

In a country known for its cultural treasures, the medieval town of Pietrasanta – known as the “City of Artists” —has deep roots in Italy’s legacy of art and sculpture.

This little town has been a hot spot for artists and sculptors since the 15th century, when Pope Leo X ordered Michelangelo to construct a road from the coast below Pietrasanta to Monte Altissima, an otherwise inaccessible peak known to contain rich deposits of pure white statuary marble.  Cutting and then transporting the stone from the wilderness back to the coast proved too difficult a task to perform very often, so only the Michelangelo’s Moses and the unfinished Slaves were carved from  this marble.

But from here, Pietrasanta’s reputation as an international center for art and sculpture was set in stone, and today artists from around the world come to use the local marble studios and bronze foundries, and to benefit from the knowledge of master artisans.  And not only are these artisans highly skilled at carving stone, they also sport nifty paper hats handmade out of newspaper.